These programs include 1-2 hours of dedicated instruction per week, covering all areas of the game.

Brendon is a proven and trusted leader within the golf industry.

His extremely extensive network, combined with his sincere and caring personality can lead you in the right direction as you navigate the golf industry. 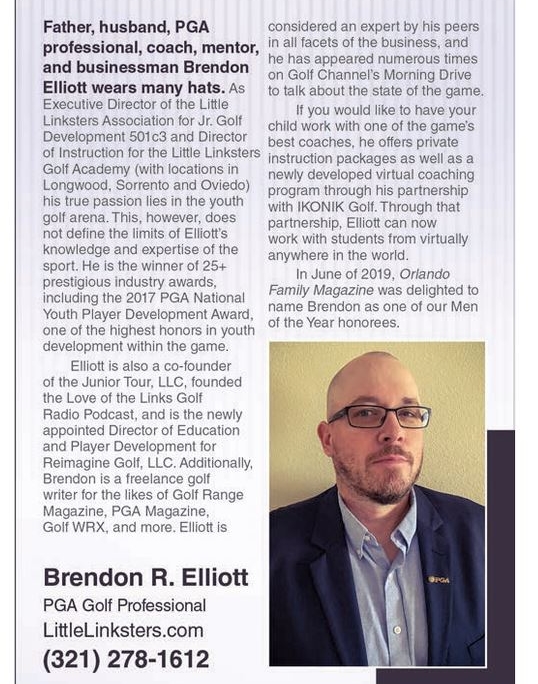 Born and raised in the small upstate New York town of Norwich, Brendon is the oldest of three and turned 46 in May of 2021. He has been married to his wife, Melisa since 2000 and they are the parents to a beautiful daughter who was born in March of 2005 and a son who was born in August 2009.

He began his golfing life when he was about 12 years old at the Riverbend Golf Club in New Berlin, N.Y. After a few years at Riverbend his father joined the Canasawacta Country Club in their hometown of Norwich, N.Y and Brendon began playing golf as much as he possibly could. He joined the boy’s varsity golf team at Norwich High School his freshman year and played all four years during high school, however, a broken hip and foot injury sidelined him for a bulk of that time. He returned to full strength his Senior year and played anywhere from the 4th to 1st spot on the very strong team. He finished 10th in the Conference Championship, shooting an 80 on a cold and blustery late fall day.

When he was 15, Brendon started working in the proshop at the Canasawacta Country Club. It was his first job and it was the start of his life in the golf business. After his high school graduation, Brendon attended the State University of New York @ Delhi and majored in Golf Course Operations. While at Delhi he was a member of the men’s golf team. Upon graduation from SUNY Delhi he moved to the central Florida area to official begin my career in the golf business. Brendon has been working in the golf business for twenty-five plus years and is considered by his peers in the industry as one of the true leaders in the junior golf and growth of the game arena. After a successful run of 13 years at the Winter Park Country Club, the last 5 of those years as the GM & Head Professional, Brendon turned his attention toward growing the game of golf for kids of all ages but with a focus on children ages 3 to 10 years old.

Elliott has appeared in or been a contributor for numerous golf media articles with publications such as Golf Business Magazine and PGA Magazine as well as PGA.com and PGAMagazine.com. His contributions have included topics ranging from Social Media to Junior Golf. Elliott was a guest on the Golf Channels Morning Drive in April of 2013 along with Dottie Pepper and Alan Wronowski. The threesome spoke on many different junior golf initiatives that are available to children of all ages. Elliott also appeared on Morning Drive in October of 2016 as part of Junior Golf Week as well as in October of 2017 and January of 2018.

Elliott is a sought-out speaker on Junior Golf with a focus on children ages 8 and under. He spoke at the 2012 Proponent Group Annual Conference in October of 2012 which was held at Cog Hill Golf Club near Chicago. The event was held in conjunction with the 2012 Ryder Cup. Elliott spoke at the 2013 Southeastern Junior Golf Summit at Druid Hills Golf Club in Atlanta on November 4,2013. He was also a presenter at the 2014 PGA Youth & Family Golf Summit held during the week of the 2014 PGA Merchandise Show in Orlando, FL and Little Linksters G.O.A.L.S. program was featured at the 2016 PGA Youth & Family Golf Summit, also in Orlando.

Elliott served in the role of Secretary, Vice President, President and the Honorary President of the East Central Chapter of the NFPGA Section from 2009-2016. He was also a NFPGA Section Board member from 2009-2015. He has also served as Chairman of the ECC Junior Golf Committee as well as the Co-Chair of the NFPGA Junior Golf Committee. Brendon was also a member of the PGA of America’s 2012-2014 National Youth Player Development Committee and the 2010-2012 & 2012-2014 Public Relations & Communications Committee. He is currently a member of the 2018-2019 PGA National Awards Committee.

Brendon is available for Private Coaching through his long-range coaching packages of 6, 9 or 12 months.

Happy Happy Ryd Friday! My latest on PGA.com covers the topic of Momentum…both Good and Bad…have a read and enjoy the next three days of one of the games greatest spectacles, the Ryder Cup! ... See MoreSee Less

Ride the Wave: The Keys to Maintaining Momentum

"Assessing Your Strengths and Weaknesses Will Help Your Decision Making on the Course" My latest on PGA.com... ... See MoreSee Less

Change Your Mentality to Get Over Your ‘First-Tee Jitters’

Change Your Mentality to Get Over Your ‘First-Tee Jitters’

Mount Dora Golf Club is happy to announce that for the entire month of September, in partnership with the Little Linksters Golf Academy , that they will be offering the Little Linksters Special! Golfers 15 years of age and younger will play FREE when accompanied by a paying adult.

"Little Linksters is a national award-winning nonprofit organization offering accessibility to the game of golf for children ages 3 to 18 in Central Florida. A wide variety of programs include lessons and clinics at local golf courses, schools and community centers. For more experienced players, tournaments and competitive scheduling through our partners at The Junior Tour, LLC offer opportunities to test skills. Or, become part of a team with our PGA Junior League Program. No experience or golf equipment is required."

"Little Linksters is a national award-winning nonprofit organization offering accessibility to the game of golf for children ages 3 to 18 in Central Florida. A wide variety of programs include lessons and clinics at local golf courses, schools and community centers. For more experienced players, tournaments and competitive scheduling through our partners at The Junior Tour, LLC offer opportunities to test skills. Or, become part of a team with our PGA Junior League Program. No experience or golf equipment is required."

GOALS Program is now FREE For All!

Through our continued partnership with the Jordan Spieth Family Foundation, the Little Linksters GOALS program or Golf Outreach Advances Life Skills, is pleased to now offer our program for FREE!

Clinics are 1 hour sessions, for all youth, ages 3-18, with special needs.

Each clinic will max out at 20 participants and online registration is necessary to take part.

Please note, the clinics are free but we will require a small annual membership fee of $50.

If Monday were a golf shot... ow.ly/AlKO30rShfO ... See MoreSee Less

Would you rather hit one out of the trees or from the bunker? ... See MoreSee Less