For the past decade, Little Linksters, with the help of some of the game’s biggest names, has been on an annual quest to find some of the best little golf swings in the world….and boy have we found some good ones!

The annual event has traditionally taken entries from November through mid-January and announced winners at the Annual PGA Merchandise Show in Orlando.

Our 2021 contest has yet to be announced. It will likely launch during Masters week in April and run through the Open Championship in July. 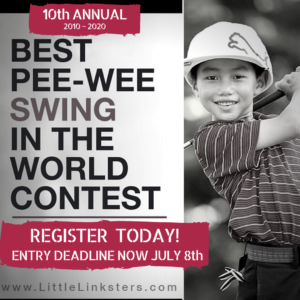 The purpose of this contest, as with everything Little Linksters does, is to have fun. This contest is proof positive that golf, among the youngest of golfers, is alive and well and we want to celebrate this by showing the world your child’s swing! We understand that with any contest, individuals will be very excited about the chances of winning but please keep in mind that all of the kids are winners by having a club in their little hands at such a young age! Keep in mind, this is a game and just so happens to be one that can be played for a lifetime…with all this in perspective, enjoy making the videos with your little ones and as always, enjoy the time with your family!

Each winner will receive a beautiful trophy to commemorate the occasion.

Open to the following age groups:

Note: In celebration of our GOALS program for youth with Special Needs, and in the spirit of inclusion, we will pick a GOALS Division winner in each age group going forward. Golf is for ALL and has no limitations!!

Little Linksters is a 501c3, NonProfit organization. The costs associated with this FREE contest have long been absorbed by Little Linksters. We encourage all who enter to make a tax-deductible donation to help support Little Linksters in their mission. Donations are private and secure and have absolutely no bearing on the outcome of the contests final results as the judges will not know who and who has not made a contribution.

The judging period for 2021’s contest is tentatively scheduled to open the week of this years Masters Tournament in April and end at the end of this years Open Championship in July.

The preliminary judging cuts down the final 12 videos in each age group are made by Little Linksters staff. Those that make the initial cut will then move on to our celebrity judging panel for selection.